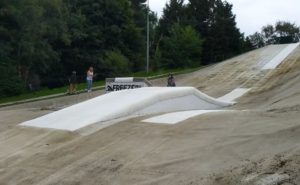 Now the summer season and filming for CSS (Championship Ski and Snowboard) is in full swing, it is a common sight to see the odd disgruntled parent clutching a GoPro (other action cameras are available) under an Umbrella whilst a team member throws themselves into various shapes off the kicker, or builds crazy link up rails to go one better on an execution trick..

As last year’s winners in both Ski and Snowboard, Bearsden have been strong contenders in the 1st two rounds and are currently in the lead, but some fantastic riding from the other teams throughout the country means that this competition is by no means a dead cert! The level has been raised by every team this year and the rounds have been incredible to watch.

Get on over to CSS website to see Bearsden’s entries and fantastic round up’s from Olympic Athlete Murray Buchan and Ed Leigh, a Brits Master of course, although he may be more famous for something else too..

..and if you see a parent on the slope, crying in the rain, please throw chocolate or coffee