So, after weeks of basking in the Scottish summer sunshine, the second year of Championship Ski and Snowboard competition (run for GB Park and Pipe) is over.. with the Award evening last Friday, Bearsden have smashed it for a second time, winning both categories again! You can watch all of our matches here. 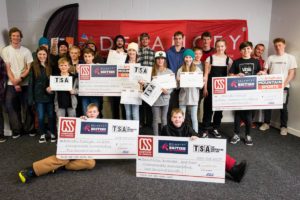 A new concept last year devised by the GB Park and Pipe team and British Ski and Snowboard, the competition is held over the summer, with freestyle teams from all over the country pitted against each other,  submitting videos of a team of four, each member performing 3 types of trick. The comp runs for five rounds and Bearsden Ski and Snowboard teams worked hard each time, coming up with new and creative ways to show off the talent coming out of our program.  In a definite up levelled competition from last year, Bearsden again took the honours, with as well as team wins, some individual awards as well as very high placed individual rankings.

From the Freestyle Ski team, Chris McCormick swept up a heap of awards, taking  highest ranked skier spot as well as individual wins of Most Valuable player, Highest single match score, and best rail trick with an unbelievable underflip ONTO a rail, then spinning 270 degrees off it.  Murray Buchan took the honours for us with best execution trick, a huge and creative flair, stall 180 on the quarter pipe, but also showing that this Olympic pipe rider is multi talented, with huge rail tricks and a switch 1080 on the kicker. Olivia Burke finished 2nd overall female, spinning huge 720 and 540’s throughout. Her brother, Luke Burke, took 2nd overall Young Gun (under 15) landing 720 and switch 540’s and both siblings showed impressive ex tricks each round, including Luke sliding a rail combo with a 90 degree turn and Olivia spinning onto the transfer line with a 180 on switch 180 off. Fantastic stylish and technical riding from the whole team, with amazing scoring rounds also shown by Harris Booth who rode in the early stages, showing mega control with a backflip, late 180 to land as well easily stomped corks and rodeos. Ronan McClaren completed the series in the last round, switch 720 nailed and also landing a huge stall on the box on top of the quarterpipe and 180’ing out… after some pole dancing! 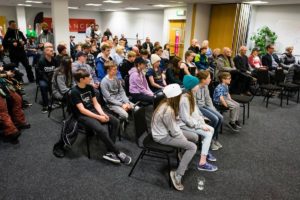 The Snowboarders did not hang about either! Full GB Team member, Matt McCormick showing his technical brilliance taking the highest scored Kicker trick with a stylie switch back 900, amongst other huge corks and massive rail gap combos. As well as massive corked hardway spins on the kicker, big brother Danny McCormick wowed everyone with his amazing”out of the box” Ex tricks, including landing his snowboard onto a ski-skateboard, riding down the slope and then back flipping off it! Danny also finished 2nd overall in the rankings.  Lewis Moore laid down a big challenge and won it, taking not just highest ranked Young Gun but also highest ranked overall, pushing it each round, and going upside down different ways each time as well as stomping cork 7’s and a front 9, and playing with gap ons and different rail combos to show his depth. Hollie Smith also stepped up and finished overall 3rd Female, pushing it each time, neatly grabbing her 360 as well as some 1 footed rail play, and plenty of ex trick variation and style! Ciaran Tucker took 3rd over all ranking, corking huge spins as well as crazily jumping onto and over the barrier between the two slopes, and despite showing us one of the best rail bails ever, he showed his mastery on different setups and spins both ways on features. Bradie Zimmer-Collins also threw into the mix for us incredibly well in round 2 with a nice switch 3 and 180 out of a rail. 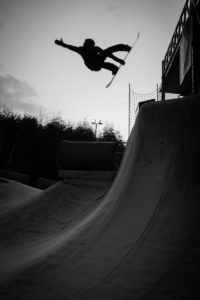 Well done to the whole Championship Ski and Snowboard team who worked hard on this amazing project, from Josie, project manager to Hamish the Inventor (I’m sure that is his CBeebies name..) the Judges, and GB Park and Pipe and British Ski and Snowboard. Massive shout out to the sponsors, TSA, Ellis Brigham and Delancey for providing the huge prize pots and allowing all the riders to shred for free on Friday!

A huge thanks to all the parents, team mates and coaches who gave up their spare time to film, cajole, beg, cry and encourage the riders through these efforts, it really does involve the whole team and not just the riders at the time. Special thanks to Head Coach, Neil McGrain and also Matt, Danny and Chris McCormick, for sorting the footage as well as supporting the riders in their trick development. Its been emotional!